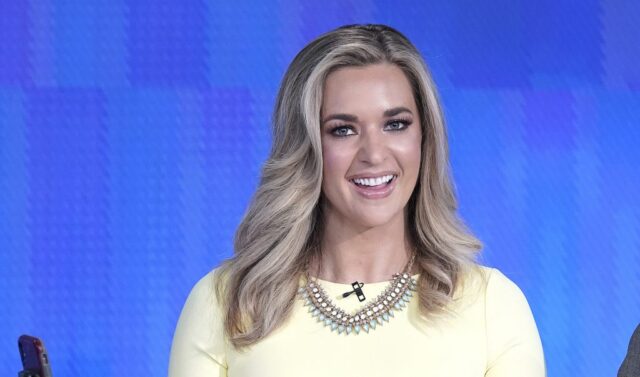 She grew up in Arizona and attended ‘Sinagua High School‘ before enrolling at the ‘University of Arizona‘ to study broadcast journalism.

After graduating college, she started working as a contributing editor for ‘Townhall‘ magazine. In addition, she worked as a news editor for the magazine’s website, ‘Townhall.com.’

Katie Pavlich was born on July 10, 1988, in Arizona, United States. She is of Irish, German, Croatian, and Australian ancestry. In a family of two children, she was the oldest and lived with her younger brother.

John Pavlich, her great-grandfather, served in World War II for the United States. In the war, he met Katie Pavlich‘s grandma and married her. Some of Katie Pavlich‘s conservative and pro-American views are rooted in her family’s background.

After moving to Arizona as a child, she developed a love for the great outdoors, including mountain climbing, river rafting, and hunting. Her parents’ identity hasn’t been disclosed in the media.

Gavy Friedson and Katie Pavlich dated for a few years before wedding her in 2017. Gavy Friedson is employed by an NGO.

Katie Pavlich is a regular on social media, posting images of herself and her spouse. Their marriage hasn’t produced any child for now.

Katie Pavlich participated in sports, including basketball and volleyball, in high school at the ‘Sinagua High School.’ In high school, she decided she wanted to be a journalist.

After graduating from high school in 2006, she enrolled at the ‘University of Arizona‘ and earned a bachelor’s degree in broadcast journalism in 2010.

After graduating from the University of Arizona, Katie Pavlich traveled to Washington, D.C., and pursued a career in active journalism. A prominent American conservative website, ‘Townhall.com,’ hired her. About 80 essays were published on the website, which was authored by ‘Fox News‘ journalists. Katie Pavlich was the website’s news editor.

At the same time, she contributed to Fox News in the hopes of becoming a more prominent journalist.

She was appointed as an alternate co-host on Fox’s panel talk show, “The Five,” a year later. Even though she was never a regular host on the show, she performed her duties admirably and received positive reviews from the show’s management.

With five ‘Fox’ characters, the show delved into various topics, including current events, politics, and more. At its peak, it was one of Fox’s most popular shows. She also served as a ‘Washington Fellow’ on the semi-monthly editorial magazine, National Review, where she wrote about politics.

As a radio host, Katie Pavlich has appeared on various platforms, including CNN, Fox Business, CNBC, and MSNBC.

ATF gun-walking Scandal, better known as the “Fast and Furious Scandal,” was covered by Katie Pavlich in 2013. Arizona law enforcement used the method To catch the Mexican drug lords and bring them to justice. They sold guns to unlawful straw buyers.

It was one of the most talked-about scandals in recent years.

The ‘Conservative Political Action Conference‘ awarded Katie Pavlich the 2013 ‘Blogger of the Year Award’ for her bravery in exposing the cover-up.

By the ‘Clare Boothe Luce Policy Institute‘ in 2014, she was honored ‘Woman of the Year.’
She received the ‘Conservative Leadership Award’ from the same group a year later.

‘Assault & Flattery: The Truth about the Left and Their War on Women‘ was written by Katie Pavlich in 2014. Through her work, she struck a blow at the American left-liberals. Both of her novels were best-sellers in their respective categories.

With the help of former White House press secretary Sean Spicer, she has been holding a podcast named “Everything’s Going to be All Right” since 2018.

According to a report, Katie Pavlich has a net worth of $5 million as of this year. She makes her earnings through journalism.