The movie is all about a widowed mom sets out to solve the mystery surrounding her young son’s emerging superpowers while keeping his extraordinary gifts under wraps.

A widowed single mom discovers that her son has super powers and tries to figure out how to raise him safely and responsibly.

The acting overall is really good but special shout out to Ja’Siah for holding the role so well. Alisha Wainwright plays a mother trying to navigate a superpower child so well.

The story line and plot twists were awesome, I literally yelled at the tv and pinched my husband’s arm throughout most of it. As a massive superhero fan I love the introduction of an 8 year old with superpowers and not someone older.

Dions reaction as an 8-year-old highlights the thinking of one at that age not fully grasping what that responsibility means. I generally get a sense of where movies are headed but the writers did SO WELL with Pat being the bad guy twist.

Definitely cheering this show on for 10 more seasons!

One thing I have to give to this show is the way they handled the realism feel of his powers to a real world scenario, definitely felt this aspect was handled very well.

The pacing of the story does a decent job of keeping you invested to keep watching which honestly what makes the series particularly enjoyable but here’s where the biggest dilemma of show comes in.

I know I know, Dion is only 7(8) throughout the series and he’s young,energetic, curious. At the point where he leaves BIONA then goes on the run with his mom is usually the section of the story where the main protagonist learns and starts to really develop or adapt mentally to the situation at hand.

The problem is that he’s only 8 and gets no turning point or realization to the occurring situation he’s totally oblivious and so unfocused on the dangerous event that he in fact gets mocking annoying throughout the entire last episode, because well he’s only a 8 years old.

I feel that the writers could of made him older (young teenager supposedly) to where he could’ve understood the circumstances more and gain character development from them.

That’s the biggest issue of “Raising Dion”(S1), to the point it definitely took away from a first season of a series that could of been a very very solid opening. 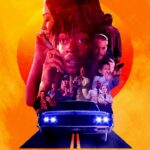